Since DX stations are reported by stations around the world, you won't be able to hear every DX station that is reported as active. The time you spend listening for a needed station to whom the band isn't open is time you can't spend working a needed station to whom the band is open. Many DXers address this problem by only considering DX stations spotted by stations in their own geographic area -- but this can be counterproductive. If you're located in the US midwest, for example, and have configured SpotCollector to hide DX Stations not spotted from somewhere in North America, the display of a needed and workable DX station that was first spotted by a station in Europe will be delayed until it is spotted by someone in North America. Similarly, a European DXer who hides DX stations not spotted by a fellow European risks missing needed and workable DX first spotted by a station in Africa, Asia, or North America. When operating on VHF or UHF bands, the problem is that geographical areas are too large to serve as reliable indicators; the fact that an "East Coast" station in Florida is working a Caribbean station on 6 meters doesn't mean that an "East Coast" station in Maine will also have a 6 meter opening to the Caribbean.

SpotCollector provides three better mechanisms for hiding active DX stations that likely can't be worked: hiding low-band DX during your daytime, hiding VHF and UHF DX not spotted by nearby stations, and using propagation forecasts to hide DX to which there is probably no band opening

Hiding Low-band DX During Your Daytime

For the low bands, you can configure SpotCollector's Band filter to hide DX stations active during your daylight hours. For example, 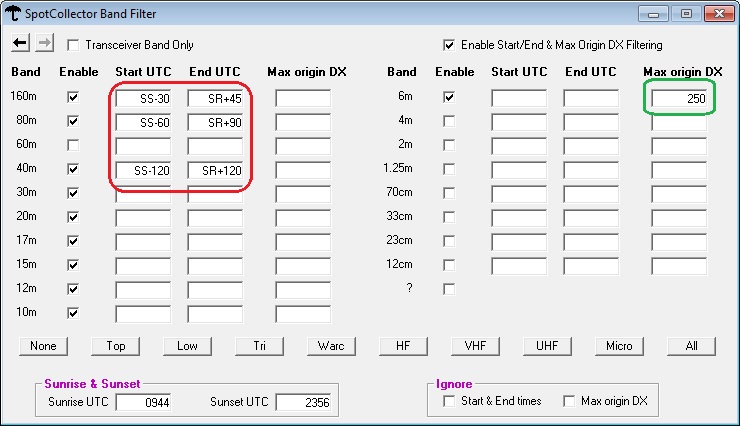 The references to SS and SR in each band's start and end times direct SpotCollector to automatically compute local sunset and sunrise times, respectively; as shown in the screen shot above, these times are displayed in the Sunrise & Sunset panel at the bottom of the Band Filter window.

Note: when operating FT8, the low-bands remain usable longer after sunrise and become usable longer before sunset than the times shown above.

Hiding VHF and UHF DX not Spotted by Nearby Stations

For VHF and UHF bands, you can configure SpotCollector's Band filter to hide DX stations not spotted by a station within a specified distance of your QTH. In the above screen shot, for example, 6m stations will be hidden unless they are spotted by a station within 250 miles of your QTH. Using this mechanism requires that SpotCollector be able to determine the location of each spotting station; it can be configured to do that by

For the bands between 80m and 10m, you can configure SpotCollector to automatically start PropView and use its included VOACAP engine to forecast short-path and long-path Signal-to-Noise Ratios (SNR) and band opening probabilities for each active DX station. You can then Filter the Spot Database Display with the SQL expression SPProb>50, for example, to hide all DX stations with whom the probabability of a short-path open is less than 50%. More aggressive DXers can choose a lower cutoff probability.

Though not as quantitative or comprehensive as the above techniques, you can also deduce current band openings from the reports of active DX stations.

Getting Started with Propagation Prediction